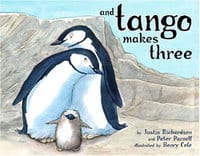 That news that the Central Park Zoo’s star pair of gay penguins Silo and Roy broke up is so last week.

The real revelation in this story is that Tango, the female child they fathered together (after kind zoo officials replaced the rock they were nurturing with a real egg), has paired up with another female named Tazuni.

Tango and Tazuni join the four other same-sex couples at the Central Park Zoo. New York really is the gayest city in the world.