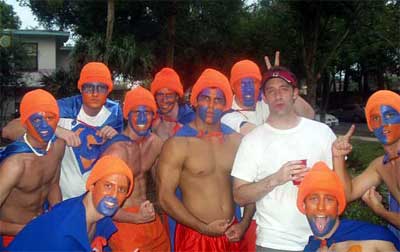 Outsports starts a series of pilgrimages to college football games and meets up with the Super Gators from University of Florida Gainesville and finds that the football fans there are a lot more gay-friendly than you might think: “When I asked him if he and his buddies minded that these pictures would [go] on a gay site, he said they didn’t and that he liked the idea of gay guys thinking he and his buddies were good-looking.”

On a related note, Sportsblog Deadspin sees gay undertones in the pile of players amassed after a football fumble: “There’s a whole other game going on down there. It’s dirty and it’s nasty. I’ve seen guys spit in guys’ mouths, put snot in other guys’ mouths. You name it. It’s just grimy.”