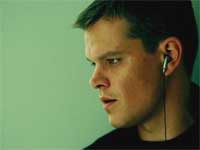 Matt Damon frolics with the frat boys. From Michael Musto’s latest column in the Village Voice:

“At Bronx Community College, they recently filmed a ‘Skull and Bones’ fraternity initiation scene for The Good Shepherd, which is about the early (and apparently very earthy) days of the CIA. According to an extra, Matt Damon ended up in a giant pit of mud with five other actors, who dropped their flesh-colored thongs, though Matt discreetly (and probably contractually) kept his on. A high point came when Matt wrestled one of the naked men in the muck as the paid extras egged them on. When things couldn’t get any more extraordinary, an assistant director yelled, ‘Cue the pee!’—no, I have no idea—which led to a yellowish flow from the rafters, complete with much behind-the-scenes fussing about the velocity and trajectory of the liquid (coming from plastic bottles, thankfully) onto the moshpit. I hear Bronx Community is now officially called Pee U.”

(via the wow report)

Related
It’s All About the Uniform [tr]