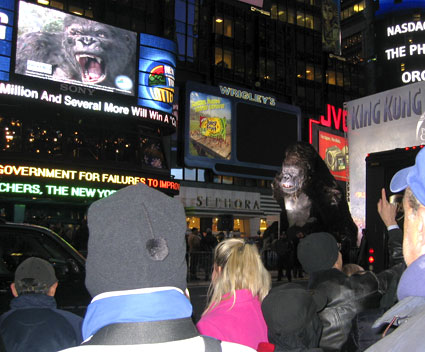 Last night I was lucky enough to attend (actually, I was one of 8000 lucky enough to attend) the World Premiere of King Kong which was held in two massive multiplexes across the street from one another on 42nd Street. Beginning early in the day, they had set up a gigantic life-size replica of King Kong in the middle of Times Square which I had to stop by and see before picking up the tickets.

Kudos to Universal for handling all these people with the organization that they did. After the premiere, we were shuttled on buses to Pier 92 where a vast jungle had been recreated complete with waterfalls, vaudeville scenes (this Kong is a period piece), fake snow (which proved to be a hazard as it was more slippery than the real stuff), Kong video game setups, and plenty of free food and booze to go around.

Some of the stars of the movie were there (we happened to spot Adrien Brody, Colin Hanks, and Jack Black) but I was a bit disappointed that the giant Kong had not been moved (or at least duplicated) from its Times Square location. They even had a replica of the tram steamer Venture when you entered the pier, water sound effects and all.

Anyway, they may have been a bit confused, because a much scarier King had arrived at the party and was attracting more attention than any of the stars. Who was it? Find out after the jump. 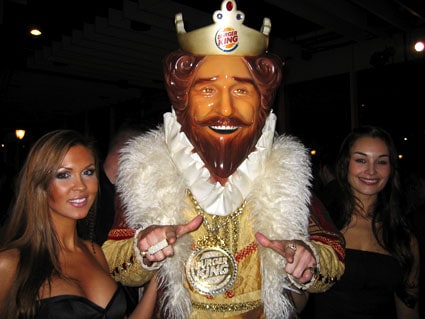 Anyway, is this a preview for the Peter Jackson sequel? Burger King Kong?

Wait and see. My review of the film will be coming up later…