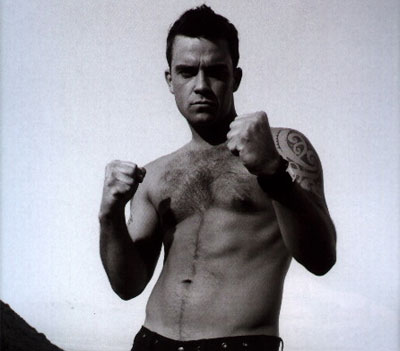 Robbie Williams has won libel damages in a court case against a writer who said the singer was gay. The writer’s book inspired a front page story in The People titled “Robbie’s secret gay lover,” ITN reports:

“The story suggested that Williams was about to deceive the public by pretending that his only sexual relations had been with women when in reality he was a homosexual who had engaged in casual and sordid homosexual encounters with strangers. It claimed he had enticed a stranger into a toilet at a club in Manchester where the two men performed a sex act on each other and where Williams requested that stranger to engage in a further sex act. It was also alleged that a year later Williams had tried to persuade the same man and then that man’s friend to engage in similar conduct at another Manchester club and that, when rebuffed, he had gone on to engage in a sexual encounter with another stranger in the streets behind the club.”

Seems like an odd lawsuit for someone who seems to enjoy being considered somewhat ‘pan-sexual’ but I suppose in this case it’s all about controlling that image.