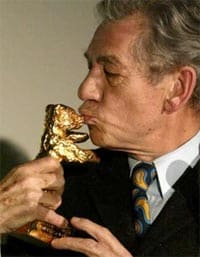 Sir Ian McKellen received a Golden Bear lifetime achievement award at the Berlin Film Festival over the weekend and used the opportunity to talk about the challenges of being openly gay in Hollywood:

“It is very, very, very difficult for an American actor who wants a film career to be open about his sexuality. And even more difficult for a woman if she’s lesbian. It’s very distressing to me that that should be the case. It’s not true of actors on the other side of the American continent, on Broadway, where people are very at ease with being open and honest. But the film industry is very old fashioned in California. My own career in mainstream films really took off once I’d come out and said I was gay. And that’s the way it should be because Heath Ledger isn’t gay nor am I straight and yet I can play straight parts and he can successfully play gay men. It’ll fade away eventually.

I was warned by friends in the industry, particularly the American film industry, that my life was about to change. They knew I was going to be famous, seriously famous. Of course it’s always a part of an actor’s interest in his job that he might appeal to a very, very wide audience but in the theatre that can’t be the case. Those films have reached round the world. And that popularity has rubbed off on me. There is no country in the world I can safely be anonymous in.

I think to become extremely famous when you’re very young must be very daunting and very difficult to cope with and shouldn’t really be part of your life because you should be concentrating on the work and not on people’s reaction to your work.”

Congrats to McKellen and the Berlinale.