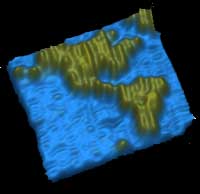 Scientists create microscopic map of the Americas using DNA to demonstrate their ability to manipulate genetic material. (via bldgblog)

Dutch group pits Gays vs. Muslims in football matchup. Also, Stonewall FC faced off against the UK Parliamentary Football Club and beat them soundly (7-0) in a match to raise awareness of homophobia.

400 students and professors walked out of classes today at Pennsylvania’s Lehigh University to protest that school’s lack of diversity, accusing school officials of creating a “hostile” atmosphere for gays and lesbians, women, and people of color. They gathered around a flagpole and rallied at the center of campus: “Dozens of speakers talked about times they were made to feel uncomfortable at Lehigh because of ignorant comments about race, being sexually harassed at fraternity parties, or being ashamed to tell their friends about their homosexuality.”