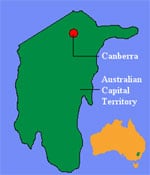 Australian Capital Territory to legalize gay civil marriages. Australia has two territories and six states. ACT is the first of any of them to enact such a law. While the laws will apply only in that territory, activists see legal challenges coming across the country. Gay and Lesbian Rights Group spokesman Rodney Croome: “Inevitably we will see same-sex couples travelling to Canberra to have their unions solemnised and returning home expecting and demanding equal recognition and protection for their relationships.”

ITMFA: Dan Savage launches Bush impeachment site: “If you’re just joining us, you’re probably wondering what ITMFA all about. Well, it stands for “impeach the motherfucker already,” which, er, I guess you kinda had to know if you found your way to this website.”

Council of Europe asks Mayor of Moscow to allow Gay Pride parade to happen: ““The universal and unalienable nature of these rights can never be in question, in this respect the Congress, of which I am President, has long sought to improve the lot of minorities and vulnerable groups at local and regional level and promote their full participation in all aspects of civic society as valued and valuable citizens. The Congress was therefore concerned when it was recently brought to its attention that a Gay Pride march, scheduled to take place in Moscow from 24 to 28 May this year, had been banned by the authorities. I would be very grateful, Mr Mayor, if you could envisage to review your decision, and convey to the Congress of Local and Regional Authorities further information in this respect.”