How the Bush administration muzzles the world’s top global warming scientist: “In my more than three decades in the government, I’ve never witnessed such restrictions on the ability of scientists to communicate with the public.” 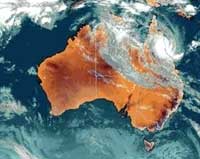 Neil Tennant of the Pet Shop Boys says fear of being labeled a camp, effeminate, stereotypical gay man delayed his coming out: “The reason I didn’t come out beforehand was that I thought we’d get stereotyped, and yes, that does happen. I’m not a very camp individual at all. There are lots of straight people who are camper than me. But there you are. People like their gay entertainers to be outrageous and outspoken. It’s a desexualised stereotype and it’s feminine. It’s not threatening.”

Simon Cowell to Larry King on the Clay Aiken reports: “”You hear all the rumours, whatever. Then you hear the lawsuits are that you pretended to be straight or something. I mean it’s just crazy, you know. It doesn’t matter [to me], no. I mean what do I care?”