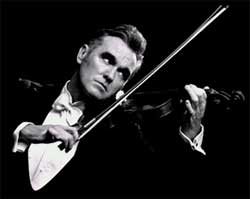 Douglas Coupland (of Generation X fame) pens an engaging Guardian non-interview with Morrissey, ahead of his latest album release, Ringleader of the Tormentors. I say non-interview because it takes eight long paragraphs before we stop hearing about Coupland and start hearing about Morrissey.

But longtime Smiths and Morrissey fans will be pleased, because there are a few revealing nuggets (well, as about as revealing as you’re going to get with the notoriously private singer).

Among them are the physical — Moz’s gigantic head (Coupland describes it as a Charlie Brown parade float), his soft voice (meant to discourage future replication of his interviews), as well as some insight into what goes on in that large head — his warning that most eBay autographs are fakes, his tendency to blurt out strange phrases, his dislike for contemporary pop culture, and the fact that he actually seems (if the lyrics to his new album are true) to be having sex.

This would be a revelation to fans who have followed the avowedly chaste singer for years. Coupland also says his “dazzling and endlessly listenable” album (produced by Tony Visconti) is one of his best ever.

He’s left L.A. for Rome and the move seems to have done him some good, says Coupland, yet Morrissey will most likely always remain an enigma, even to himself:

“You can feel liberation shooting out from Morrissey’s body like lightning bolts, but it’s also funny to think that for 46 years in his head he’s been trying to pass himself off as normal. Huh? The man defines eccentricity. Oscar Wilde is correct: the last thing we ever understand in life truly is the way that others perceive us.”