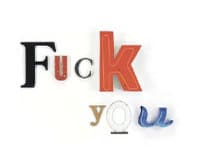 Tyler Green reports on an email the gallery sent out regarding the letter sculpture copies: “They are formally weak plagiarized versions of Jack Pierson’s work and we want you to know that they are not by Jack Pierson. Many people have assumed they are. They are, in fact, made by Simon Doonan, the chief window dresser at Barney’s. Jack Pierson has asked that he remove them but he has refused.”

I haven’t yet seen a photo of the Barney’s display. I’ve been a Jack Pierson fan for years, and there’s no doubt Simon Doonan is one as well. But, if the artistic infractions have been going on for a year as the gallery claims, Doonan should definitely make good.

Aside from being a keen sculptor, Pierson also has a love for men that results in sexy, honest, saturated portraits of them. I’d highly recommend his recent book, Every Single One of Them

, which I’ve discussed here before, if you, too, are a fan. 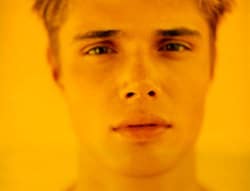 Also, before I get flamed for my own “use” of art, I’d like to give a little preview for my next “About the Banner” by saying that the above Towleroad banner is a photo I shot of a work by artist Gary Hill. However, I think there’s a big difference between photographing an artwork (which you fully intend to credit) and borrowing someone’s idea and using it as your own.