Crystal Lake, Illinois city council votes 6-1 to allow Gay Games rowers to use the lake for their competition. The decision has been a contentious one for the community’s residents. Thankfully, santity and tolerance prevailed.

Bluetooth iPod said to be coming from Apple; the device is also rumored to come with bluetooth headphones and a “deluge” of accessories. 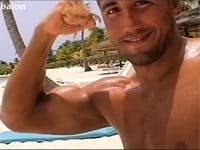 P!nk stunned by Welsh rugby glamazon Gavin Henson’s vanity: “I met Charlotte Church’s boyfriend Gavin Henson when on the Jonathon Ross show (British chat show). I was sitting next to him and he pointed to the cameraman and was like, ‘Hey you, why don’t you point that camera at me and put it on the screen so I can see how good I look?’ I’ve never heard a guy say that. That was the first thing I heard him say. I thought, ‘Who is that dude?'” Henson was preparing to let the world know about his comprehensive beauty rituals.

You may have heard about the Duke Lacrosse team members who were involved in the alleged rape of an exotic dancer at a party recently. One of those team members, Colin Finnerty, may also hold a previous assault record as a gay basher according to the NYT. “[Finnerty] and two of his teammates from high school lacrosse were arrested on Nov. 5 in Washington. At 2:30 a.m. that day, Jeffrey O. Bloxgom told the police that the men had ‘punched him in the face and body, because he told them to stop calling him gay and other derogatory names,’ according to records at the Superior Court of the District of Columbia. Bloxgom also said that the three men ‘without provocation had attacked him, busting his lip and bruising his chin.’