Hundreds of gay and lesbian families to line up tomorrow for Easter Egg Roll on White House lawn. 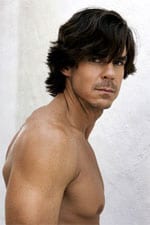 Billy Bean, Jermaine Taylor, Frank DeCaro, and Suzanne Westenhoefer debut on Game Show Network April 17th in I’ve Got a Secret. Bean: “How many gay people have had a chance to be completely themselves on TV? We’ve been guarded and monitored forever. I enjoyed just being myself…If we can be ourselves on TV five nights a week and not be programmed by writers … we are going to be doing a service. There’s some good that can come out of the experience.”

Mixed response to anti-gay graffiti at Michigan Tech University inspires both praise and criticism: “On April 7, students awakened to the last day of Pride Week to find between 35 and 45 violent threats against gays chalked on campus sidewalks and buildings. While one student was not satisfied with the university’s response to the attack, a representative of Keweenaw Pride told BTL that most of the response has been ‘amazing.'”

Domestic Partnership bill in Colorado gets backing from Senate committee: “Supporters stressed that the proposal — which must be approved by voters this fall — would not give gay couples all the same rights as married couples because they still wouldn’t be entitled to the benefits allowed by federal law. Those include filing joint tax returns or receiving benefits if a partner dies while serving in the military.”