Women probably not from Venus, but men may really be from Mars.

Keith Boykin makes a visit to London and offers a report on what it’s like to be black and gay in the UK: “I got the impression that many of the people in the community were looking to black gay Americans for inspiration, but at the same time they were hoping that we in the U.S. would be more aware of their lives and struggles of people outside our own country. Once again it was clear to me that black Britons knew a lot more about black Americans than we know about them. And Black gay Britons also seem to know a lot more about black gay Americans than we know about our British counterparts.” 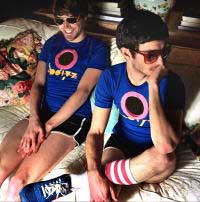 Is this rap or something altogether different? Gay duo the Mirrorboiyz want to prove homophobic rappers wrong: “Recently, 50 Cent said that gays could never be a part of the rap game because they aren’t aggressive enough. I guess we want to prove him wrong. If we’re not aggressive enough, we can at least be sassy enough.” Download two songs at Arjanwrites.

Language Log takes a look at how the word Brokeback has entered the lexicon.

Gambling on bigotry? Wingnut Missouri town of Blackjack says you can’t own a home unless you meet their definition of family.