Simon Rex caught with his pants down at New York club Stereo.

The return of AbFab: Joanne Lumley, Jennifer Saunders and Dawn French team up for new BBC Comedy: “The yet-untitled series, created by Saunders, will run seven episodes. It focuses on the members of a women’s club in a small English town. A newly widowed woman (Sue Johnston, “Waking the Dead”) joins the club, which purports to be dedicated to truth and fellowship, but finds its members also rather enjoy a bit of good gossip.”

David Beckham says he wants to end his career in the United States: “I want to be part of a country that is passionate about sport.” Honestly, I think Europe is a lot more passionate about football than America. 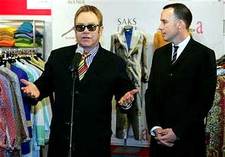 Elton John and David Furnish are having a garage sale in Rockefeller Center. Thousands of clothes worn by the couple have gone on sale to benefit the Elton John AIDS charity. “Items included a black Versace suit with John’s song titles – including “Tiny Dancer” and “Rocket Man” – woven into the fabric and the polka-dot Richard James suit John wore when he performed with Eminem at the 2001 Grammy Awards.”

Said Elton: “There’s the most extraordinary collection of T-shirts, your baseball caps, your shoes, from flamboyance to classic. And spend some money to help other people who desperately need their lives to be changed and improved, and you’ll be doing a really good thing.” 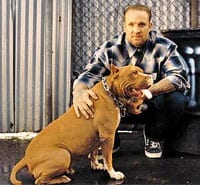 Sandra Bullock’s man Jesse James wants to be a fashion designer for real men who would “shudder” at the term lifestyle brand.

To include plaid shirts, skull and gun t-shirts: “I think our customers get their fingernails dirty, and if they rub up against a car, it’s not the end of the world.”

A new day has come? Cher to move into Celine Dion’s territory at Caesar’s Palace when the French-Canadian moves out. And she’ll receive a $60 million paycheck.

Previous Post: « And You Thought Stretch Hummers Were Obnoxious
Next Post: Student Expelled for Saying He’s Gay on MySpace »