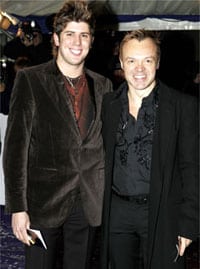 TAB: Graham Norton splits with boyfriend Kristian Seeber: “I don’t think you date people unless you think that it might be a possibility you’ll be together forever. Everyone is a bit romantic when they fall in love. You do hope it will be forever and always. I never understand people who just go on lots of dates. In the past I would have pursued something just for sex. But now I can’t be bothered. I just think ‘it’s sex, I’ll have sex again’. I’m a man and men are dogs but sex gets less important…There have always been long gaps between my relationships. Finding someone you want to spend your life with is hard. As you get older your checklist of what you’re looking for gets longer, but the checklist of what you’re offering gets shorter. You become fussier but you’ve got no right to be that way.”

Gay Pride in Phoenix attracts 10,000 over the weekend.

What’s the distressing secret behind Tom Cruise and Nicole Kidman’s breakup that could be revealed on a few FBI tapes?

United 93 trailer hitting too close to home? “One lady was crying. She was saying we shouldn’t have [played the trailer]. That this was wrong … I don’t think people are ready for this.”

Talk about nuts! U.S. researchers have created powerful stem cells from human testicles, which they then nurtured to become heart, bone, and nerve cells. I wonder where they got the testicles from? Maybe someone should ask one of the three men charged over the weekend for running a sadomastic dungeon in rural North Carolina. They allegedly performed several castrations for willing participants over the last year, without a license.