British MP Mark Oaten, who resigned last January after an alleged affair with a rent boy, is back with his wife. Belinda Oaten, who at that time called her husband’s actions “the ultimate betrayal” has apparently forgiven him. Mark Oaten: “One of the reasons why we are where we are is because Belinda understands the circumstances that led to it.” 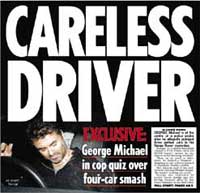 TAB: George Michael reportedly in three car hit and run at 8 am on a Sunday morning: “Witnesses who rushed from their houses yesterday morning after hearing a loud crash discovered the dishevelled ex-Wham singer sitting in his Range Rover staring at a dented grey Ford Fiesta. He then started to drive away but hit the rear of a SECOND parked car, a white Peugeot 406. The impact sent the Peugeot shunting foward into the front of the THIRD stationary motor, a green Rover 218 that had been parked a few feet away. The onlookers say they then saw 42- year-old George simply drive away without finding the cars’ owners to exchange insurance details with them.”

The original cast of Rent will be reuniting on April 24th, to mark the show’s tenth anniversary. 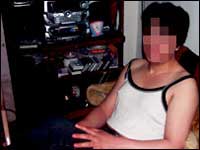 Increase in violence against homosexuals in Iraq blamed on militia groups and religious figures that have risen in the wake of the U.S. liberation occupation. Iraqi man :”I don’t want to be gay anymore. When I go out to buy bread, I’m afraid. When the doorbell rings, I think that they have come for me.”

Los Altos, California Community Foundation board defies the city’s refusal to issue a Gay Pride Day proclamation by supporting efforts by the high school’s gay-straight alliance to throw a gay pride parade in the city: “Mayor Packard says he’ll respect the kids’ free-speech rights and won’t go out of his way to nix the parade. But he’d prefer that the event remain low-key. He’s not wild about the idea of many out-of-towners and big-name politicians disrupting downtown life on a Sunday afternoon.”

Cyndi Lauper denies she once tasted bird poop: “It is not true that a flying bird once pooped in my mouth when I was singing in a concert. It did not go in my mouth. It went on my lower lip. I could not taste it. I just wiped it off . . . I actually considered it a good-luck sign.” I wonder if Lauper was singing “Sally’s Pigeons” at the time…