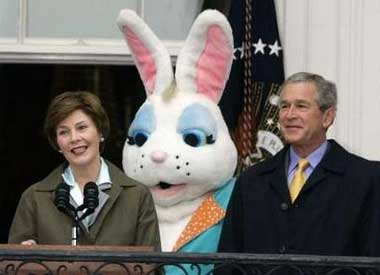 Gay families who lined up over the weekend (some for 24 hours) hoping to create a visual impact at the opening of the White House’s annual Easter Egg roll this morning were disappointed to be given tickets that afford them a much later entrance time. In prior years, entrance to the Easter Egg roll has been first come, first served. Now, instead of having the opportunity to greet the President and First Lady Laura Bush, the gay families will find the Cookie Monster and Clifford the Dog on hand to greet them. 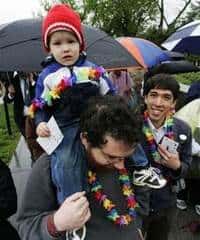 Inquiries by PageOneQ as to the reasons for the ticketing change were met with this response: “This year, the President and Mrs. Bush invited a special group of children who volunteer from organizations like 4-H, Big Brothers Big Sisters, Campfire USA, Citizen Corps, Learn & Serve, Little Hands Big Hearts, YMCA and Youth Service America. These youth volunteer were invited to attend during the morning hours of the event.”

Seems like a Roveian move to me. It’s hard to argue against youth volunteers. But was it naive of gay parents to believe that the statement their presence might have made at the annual White House Easter Egg Roll would not somehow be blunted by the Bush strategists?

Perhaps. But at least one gay parent who plans to be there says it doesn’t matter: “The fact that the White House couldn’t cancel the event or keep our families out, without getting egg on its face, suggests that things are shifting in America, because it’s assumed there would be some negative reaction from a portion of the American public, a significant portion perhaps. And, if there has been a subtle shift it’s because we’ve been visible as families in our communities, all over the country.”