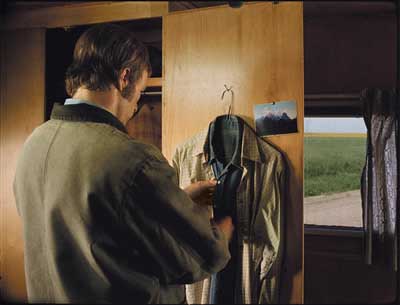 Tom Gregory, the man who spent more than $100,000 on the shirts from Brokeback Mountain, recently bought the postcards that are pictured in the film’s final scene for an undisclosed sum. Gregory contacted Brokeback‘s propmaster Ken Wills with the intent to reunite the famous props. He also made an additional donation to Variety Children’s Charity (the group benefitting from the sale of the shirts) for $10,000.

Said Gregory: “The shirts and the postcards are together again. They are more than simply props, they are symbolic of a great love and a remarkable film.”

The shirts and postcards (which are being mounted on wood) will be on display at the GLAAD awards in Los Angeles this Saturday, April 8th.

Now if Gregory can just obtain Heath Ledger, the window, curtain, wardrobe, and a bucolic western landscape he’ll have the entire scene.

ADDENDUM: I’ve just confirmed that Gregory bought a total of five postcards, four of which were used in the film, including the ones sent as mail (the postcard by which Ennis finds out Jack is “Deceased” and also the one that comes before the first visit).