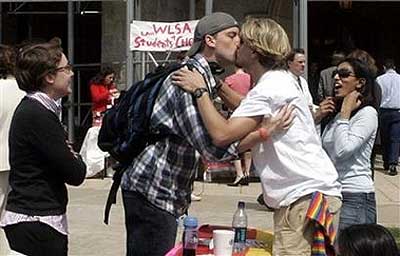 Supreme Court Justice Antonin Scalia made an appearance at University of Connecticut’s law school yesterday, where he told students his proudest moment as a judge was not being “chased off” a case involving his hunting buddy Dick Cheney. That’s his proudest moment? How pathetic.

Maybe he would have felt differently if Cheney had shot him in the face.

Anyway, some students took the liberty of setting up a same-sex kissing booth outside the hall where Scalia was speaking, as protest against his comments on gays, minorities, and women: “‘His visit opened a lot of conversation on this campus,’ said third-year law student Colby Smith, who was wearing an ‘I Kiss Boys’ T-shirt. ‘We want to make sure people understand what the concerns are with him, and why his views are particularly offensive.’