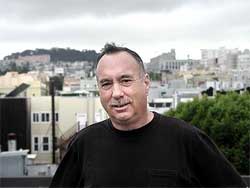 As Washington State waits for a decision from the State Supreme Court regarding same-sex marriage, the Seattle Times runs an interesting profile on Paul Barwick, who with his late partner John Singer challenged that state’s marriage laws back in 1972.

It’s interesting to see that in 34 years, the language of those for and against gay marriage has not changed much at all, though it appears that attitudes toward gay people in general have definitely evolved. Barwick comically describes a call he made to an employee of the city of Seattle thirty years ago from the Gay Community Center:

“She’s literally dropped the phone on the floor and I heard her gasping to a co-worker, ‘the g-g-g-g-gay people are calling.’ That’s not bad for 30 years.”

Barwick and Singer (who died of lung cancer in 2000) made activism part and parcel of their everday lives, and requested a marriage license from the King County auditor’s office in 1971, and were turned down. Barwick says that if one thing good came out of that, it was the exposure it gave to gays in general:

“There were an awful lot of young people who saw this on the news and called to say they’d never met another gay person. They thought they were the only ones. At times when I thought that maybe my life was all screwed up, those messages made it all worthwhile.”

The couple challenged King County’s decision and lost after a Superior Court judge threw out their claims “based upon the state’s recognition that our society as a whole views marriage as the appropriate and desirable forum for procreation and the rearing of children.”

Sound familiar? Today, 19 gay and lesbian couples wait to see if history will repeat itself.