United 93: Will You See It? - Towleroad Gay News 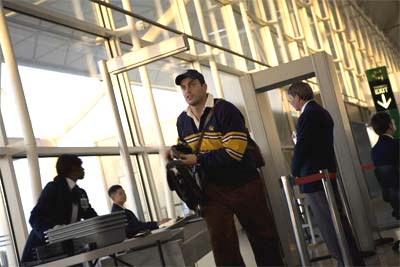 I’m just guessing this is the character of Mark Bingham, based on the Cal rugby shirt. Does anyone have any info on how Bingham is depicted in the movie? I wasn’t planning on seeing it but based on just about every review I’ve read, the movie is extremely powerful. Last night it screened in New York:

“When the opening night film for De Niro’s Tribeca Film Festival ended, there weren’t just muffled tears or soft sobs but a loud, unnerving, heartbreaking keening, a howling in the darkened theater as United 93 ended with a black screen and notes on the day’s events. The sold-out crowd that exited was the most somber, silent group anyone could imagine.”

Bingham’s aunt, Candyce Hoglan, was at the Tribeca screening. Her reaction to the film? “Excruciating. I stood on the side in case I had to bolt, but I didn’t. It’s not a feel-good movie,but if we need any reminder of how important airline security is, this is it.”

Has anyone seen it? Too soon for this movie? Will there ever be a right time? Thoughts?