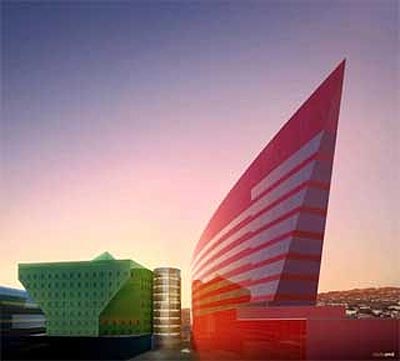 Here’s a recent rendering of the red building in Cesar Pelli’s Pacific Design Center that should take shape in the coming years, joining the blue and green structures to form West Hollywood’s architectural centerpiece.
From AIA Architect:

“For the Red building, Pelli describes a convex curve shaped toward the plaza, with a concave form toward the Hollywood Hills to the north. ‘It reads like a curved sliver that projects into the air like a prow of a curved ship,’ he says. ‘The Green building has a vertical axis so that it is very anchored, very stable. The Blue building has a horizontal axis, but is also a very straight and linear. It does not have an axis, but has a curved line of movement. This is the most dynamic of the three buildings.’ Pelli likens the interplay of the buildings to a dance in one of Matisse’s paintings, “when people are holding hands and running around.”

Folks seem to either love or hate these buildings. The first two buildings are referred to by many as the Blue Whale and the Emerald City. What should this third one be named?