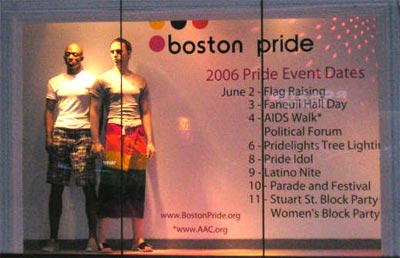 Here’s a great visual metaphor for what the wingnut bigots would like to see happen to gay people. 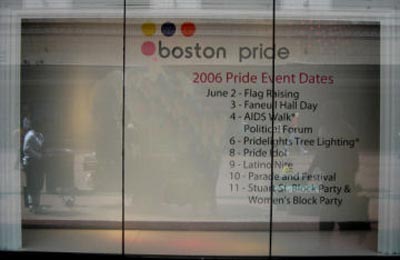 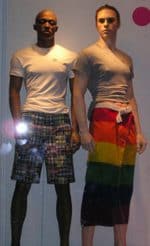 Macy’s Downtown Crossing Department Store in Boston caved to conservative group MassResistance (formerly Article 8 Alliance) and removed two mannequins from a Gay Pride display after complaints from the group that the display was offensive. The display was designed by Macy’s with approval of the Boston Pride Committee.

Said MassResistance President Brian Camenker: “They were male mannequins with enlarged breasts, and one was wearing a skirt. It was really disgusting.”

Um, that skirt would be a gay pride flag. I wonder if Camenker would have been equally offended had the store used mannequins with flatter chests and slacks?

No matter, the real bullshit here is that Macy’s caved to this fringe bigot.

A Macy’s spokesperson responded to the store’s actions: “We believe in diversity, and our customers are very important to us. But (the display) did offend a few of our customers, and we had to reexamine it.”

Did they happen to think about what their gay customers and employees would think of the move? Obviously not. I’ll think twice before stepping into another Macy’s until the store reassembles the display and apologizes.

After the jump, find a photo of the bigot from MassResistance, Brian Camenker, as well as an email that Macy’s is apparently sending out in response to the actions. 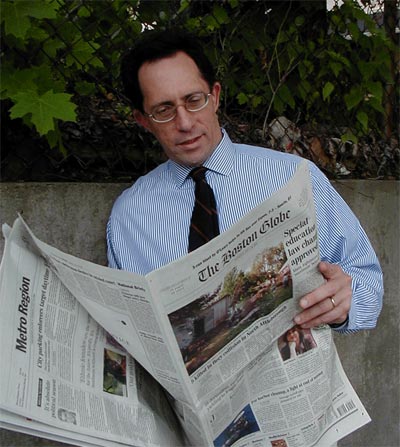 Like many other community initiatives and organizations that Macy’s has supported over the years, including window displays and programs in celebration of Black History Month and St. Patricks Day, the window currently showcasing events for Boston Pride week at Macy’s downtown supports a diverse part of our community. Macy’s respects the many backgrounds, traditions, beliefs and heritage of all our customers and will continue to support a range of community causes, organizations, and initiatives that add to the cultural diversity of the markets we serve.

Our intention is always to welcome and include all members of the communities we serve, and certainly is never intended to cause any discomfort to you or any of our shoppers. I regret that we have offended you in any way in our commitment to be inclusive. We thank you for taking the time to inform us of your concerns and hope that you will reconsider your decision to visit us again.

Feel free to contact Christine and let her know how gays and lesbians feel about what the store did.