Postponed due to the war in Lebanon, Jerusalem’s Gay Pride parade has been rescheduled for the day before the eve of Rosh Hashana, September 21. 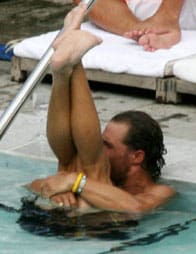 Matthew McConaughey demonstrates his flexibility. It appears he’s making a new career of being photographed shirtless by the paparazzi.

Elton John promises the world a hip-hop album: “I want to bring my songs and melodies to hip-hop beats — a bit like no “No Diggity” by Blackstreet. I love these beats, but I have no idea how to get them. I want to work with Pharrell, Timbaland, Snoop, Kanye, Eminem and just see what happens. It may be a disaster, it could be fantastic, but you don’t know until you try.”

TV torture: Saddam Hussein has reportedly been forced to watch the South Park episode banned in Iraq in which Hussein was portrayed as the Devil’s gay lover. Matt Stone: “I have it on pretty good information from the Marines on detail in Iraq that they showed him the movie. That’s really adding insult to injury. I bet that made him really happy.”