More excerpts (we’ve seen a couple previously) from former New Jersey Governor James McGreevey’s new memoir The Confession have turned up online, and detail how McGreevey’s Brokeback marriage and steamy self-discovery turned into a political horror show as the media began to catch on to his relationship with Israeli “security advisor” Golan Cipel. 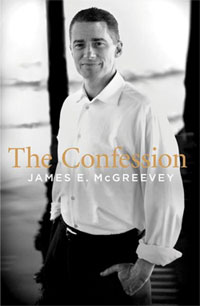 “In our milieu, it wasn’t enough to appear straight; you actually had to prove your mettle in public. I felt I had no choice but to engage the services of the women at the clubs, for show. There were times — scores of times — when I would invite friends to my apartment or hotel room when I knew I’d be in bed with a woman, just so they’d ‘accidentally’ catch me in the act.”

When McGreevey began his affair with Cipel, he’d have state troopers guard the hotel where they were having sex:

“It was wrong to do. I wasn’t an ordinary citizen anymore. But I took Golan by the hand and led him upstairs to my bed. We undressed and he kissed me. It was the first time in my life that a kiss meant what it was supposed to mean — it sent me through the roof.”

A sex that up till then, McGreevey was unaccustomed to:

“I was like a man emerging from 44 years in a cave to taste pure air for the first time, feel direct sunlight on pallid skin, warmth where there had only ever been a bone-chilling numbness…I pulled him to the bed and we made love like I’d always dreamed: a boastful, passionate, whispering, masculine kind of love.”

“Twice Golan and I had managed to spend whole nights together, once in Philadelphia, when we’d gone for an Army-Navy game and a Jewish event; and another time for a meeting at the American Israeli Political Action Committee in Washington, D.C., where we had the nerve to tell the state troopers we would share a double-occupancy room to save taxpayers’ money. We grew so concerned about the troopers listening in that we made love on the floor, fearing a squeak from the beds.”

And the realization that the jig was up:

“I can’t say I was convinced that an exclusive interview in The Record would dig us out of our hole. But I was horrified when reporter [Jeff] Pillets’ article appeared the next day. I read it in a cold sweat. Pillets and co-author [Clint] Riley seemed to be hinting broadly that there was a homosexual subtext to Golan’s appointment. For instance, rather than call him a naval officer in the Israeli Defense Forces, where he was indeed a lieutenant, they called him a ‘sailor.’…But the worst line was this: ‘Democrats close to the administration say McGreevey and Cipel have struck up a close friendship and frequently travel together.’ It was like I was right back in Cub Scout camp again: I wasn’t sure if I was reading too much into this article’s innuendo, or too little…That confusion ended when my mother called me. ‘Jimmy, they’re saying you’re both gay,’ she said in disbelief.”

The Confession looks to be one of this fall’s juiciest reads.