The Raw Story reports that the authors of The Architect: Karl Rove and the Master Plan for Absolute Power

, a new book on the Deputy Chief of Staff, reveal that Rove’s stepfather Louis masqueraded for years as a blood relative to his stepson, then divorced his mother and lived the rest of his life as an openly gay man in Southern California. At that time he began carousing with longtime friend Joseph Koons, who had been openly gay for years: 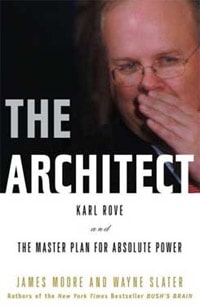 “In the book, Koons recounts how he and the elder Rove began to cruise the scene in Palm Springs, looking to make friends with older gay men, eventually forming a social club they dubbed the ‘Old Farts Club.’

‘The men met every Friday, usually at the Rainbow Cactus Restaurant or the Martinie Burger, to eat, drink, and socialize,’ the book says.

Moore and Slater raise speculation as to whether the suicide of Rove’s mother, Reba, may have been aggravated by shame she felt over Louis’ homosexuality.

A man of almost startling intelligence, Rove is not likely to have ignored the possibility that his father’s homosexuality might have figured in his mother choice to end her own life,’ the authors write.”

Authors Moore and Slater say that Louis Rove remained close to his stepson throughout his life, though Rove has kept quiet about both the divorce and his mother’s suicide. It’s certainly an interesting footnote to an administration that based much of its re-election strategy on the divisive topic of gay marriage.