Rupert Everett calls the effort to stay in the closet in Hollywood “too exhausting” in an interview with the UK’s Daily Mail, slamming the industry’s discrimination against gay actors in a reference to one-time co-star Hugh Grant: “The difference is, one of us is straight and one is gay. The straight one gets to walk down a red carpet with a beautiful girl and everything works out and the gay one has to back-pedal and do independent movies.” 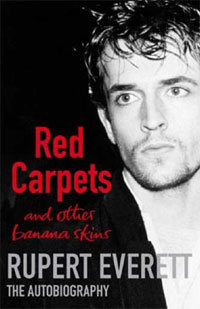 When he’s not acting or crusading against the local Starbucks, Everett is writing. Everett has just published a tell-all memoir, Red Carpets and Other Banana Skins: The Autobiography

, in which he opens up about his relationships with Julia Roberts, Sharon Stone, and Madonna, among others.

On Julia Roberts: “There is a male quality to the female superstar. There has to be.

If a girl is going to survive in Hollywood . . . Flocks of executive seagulls will try to take her and drop her onto the rocks.

“She must learn to [bleep] them before they [bleep] her if she is to survive, so she becomes a kind of she-man, a beautiful woman with invisible balls.”

On Gianni Versace’s funeral and Madonna: “I arrived early and found Donatella alone on a couch, wearing a silver dress, wrapped up in a thousand memories, clouded by tragedy. ‘I’m so depressed,’ she said simply. ‘Me too,’ I replied, but mine was cosmetic by comparison.

After supper, a cluster of divas, including Madonna, sat around Donatella in the courtyard. The party moved around us like the sea. Our table was a rock and waves of fruits de mer tried to crash against it and join our group. The undertow on this particular stretch of bitch was strong. Madonna smiled graciously to all and sundry, secure in the knowledge that someone else would do the dirty work and give any unwanted jellyfish ‘the old heave-ho’.

Those not welcome were swept back out to sea by the polite but firm dismissal of Gwyneth Paltrow or the glum monosyllabic reply of Guy Ritchie, Madonna’s new boyfriend.

Unbeknown to most of us, Guy and Madonna were having a baby. Guy’s body curved around his princess in acquiescence, but he was not so accommodating to some of her old chums.

This night marked the beginning of the end for Madonna and her younger brother, Christopher Ciccone. They had been inseparable in childhood and she had taken him with her to the material world, where he had provided a solid raft in the shark-infested waters.

He had a blunt, aggressive manner, and he often looked as though he was laughing at you, particularly when he was drunk, but underneath he was vulnerable and funny. To know her at all you had to know him.

But he and Guy were from different planets, and in a way the one’s success relied on the other not being there.

Others were also on the way out. Guy was not particularly comfortable with queens, and so it was a last call for a lot of the disco bunnies and club-mix queens who made up the fabric of Madonna’s mantle.”

More excerpts after the jump…

It was a sickly script about a nasty humourless woman and her lovely gay best friend, who was funny, supportive, had great dress sense, everything a man was not, and could break into a show tune at any given moment.

He was also that rarity in the homosexual community, a NPB (non-practising b*****) who gave up the awkward matter of sex when all his friends died. By page 23 of the script, these two revolting people decided to have a baby. I turned it down flat. But Lansing said that if I agreed to take part she would green light the movie. What’s more, I could even approve the casting. My agent suggested Madonna for the woman’s part and I was ecstatic.

The studio was less enthusiastic. There was a kiss-of-death theory about Madonna in films. But we pushed for her and Lansing eventually said that if that’s what I wanted, then she’d go with it.”

On Sharon Stone and Basic Instinct: “One night at the Golden Globes, she told me she was making the sequel to Basic Instinct and had suggested to David Cronenberg (the director then attached to the film) that I should play the male lead.

I went to meet him the next day, feeling pretty excited because he was a director I really admired.

We got along well and he left the lunch to call MGM, the studio making the picture, to inform them that he had found his actor. At this point all hell broke loose.

My agent was told that, to all intents and purposes, a homosexual was a pervert in the eyes of America and the world would never accept me in the role.

For about a week, there were lots of transatlantic phone calls. Then my agency started weighing up the pros and cons.

They had a business to think about and MGM versus Rupert was a no-brainer. By the following Monday morning, the whole saga had blown over without a trace.

Sharon, on the other hand, never gives up. ‘Honey,’ she said. ‘I can’t believe what’s happening. I’m with my pastor and we agree that we should stop the film and sue the studio. What do you think?’

I lay back on my bed, my head spinning. I searched for a cigarette, had a shot of vodka and a couple of painkillers. Suddenly, for the first time in my career, I felt totally overwhelmed and began to cry.”

Red Carpets and Other Banana Skins: The Autobiography

You may have missed…
Rupert Everett: Starbucks is like a Cancer [tr]