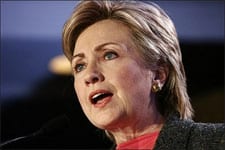 In her first statements following Wednesday’s New Jersey Supreme Court ruling that same-sex couples must be afforded the same marriage rights as heterosexual couples, Clinton said that her position on LGBT issues “has certainly evolved” and added that were New York Gubernatorial hopeful Eliot Spitzer to introduce same-sex marriage legislation in the state as he has promised, she would support it:

“My position is consistent. I support states making the decision. I think that Chuck Schumer would say the same thing. And if anyone ever tried to use our words in any way, we’ll review that. Because I think that it should be in the political process and people make a decision and if our governor and our Legislature support marriage in New York, I’m not going to be against that… So I feel very comfortable with being able to refute anybody who tries to pit us or pit me against Eliot. I am not going to speak out against, I’m not going to oppose anything that the governor and the Legislature do.”

Clinton also acknowledged the more difficult battle the term “gay marriage” would have in the court of public opinion: “If you go the next step and say, ‘But I want what is called marriage,’ you’re going to have a problem.”

Clinton’s decision to restrain from speaking out on the Senate floor this year about a proposed constitutional amendment to ban gay marriage was strategic, she said: “Very few Democrats spoke, because maybe you thought one way, which is that you want people out there speaking for us. We thought as — force the Republicans out there, make them look like they’re trying to enshrine discrimination in the Constitution. We don’t even want to dignify it.”

She later slammed the Bush administration’s abuses of power: “I think they put Nixon to shame.”