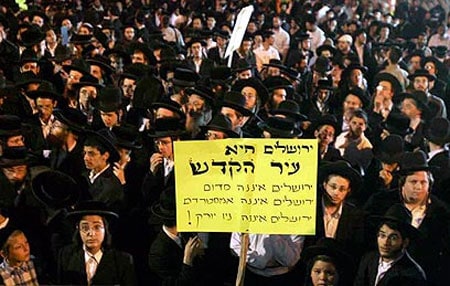 The Ultra-Orthodox Haredi Jews are on the same page as the evangelical Christian group Repent America, who blamed Hurricane Katrina’s destruction of New Orleans on the gay Southern Decadence festival that was to have taken place over Labor Day weekend in 2005.

The Haredim say that the Gay Pride parade that was planned in Jerusalem was the reason war broke out with Lebanon. Thousands protested against it on Wednesday at Jerusalem’s Sabbath Square:

“‘The war in the north broke out as soon as the parade was announced,’ a Mea Shearim resident told Ynet…Rabbi Moshe Sternbuch, the head of the Eda Haredit rabbinic court, said during the rally, ‘We did not succeed in Lebanon due to the obscenity and promiscuity in the Holy Land.'”

The sign in the photo above reads “Jerusalem is not Sodom, Amsterdam or New York.”

When will these religious wingnuts realize that their hate and intolerance is the true source of conflict?

Haredim: J’lem gay parade may lead to another war [ynet]