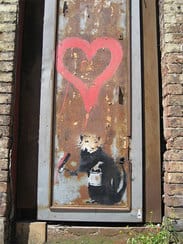 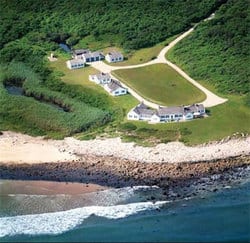 With prices for street art prankster Banksy through the roof, many of his actual “street paintings” have become targets for thieves eager to cash in. So it wasn’t a surprise when a cleaner at Jacaranda Developments discovered a group of men posing as workmen trying to pry a rusty metal door off one of the buildings. On the door (above left) was a well-known Banksy that has come to be known as the “Liverpool Love Rat”. The door has not yet been valued but it has since been put under lock and key.

And the Montauk, Long Island estate of that other pop culture commentator, Andy Warhol, finally sold. The price had been hacked down from $50 to $40 million after being on the market for years. Mickey Drexler, the CEO of J. Crew, scooped it up, reportedly for less than $30 million.