Daniel Craig has reportedly requested that studio execs “modernize” the Bond series by including gay scenes as well as full-frontals “to please both his male and female admirers” (like Dame Judi Dench).

Said Craig: “Why not? I think in this day and age, fans would have accepted it. I mean, look at (British TV series) Doctor Who – that has had gay scenes in it and no one blinks an eye.”

I hate when these items come with no attribution (par for the course for Contact Music) but it did give me the opportunity to post these caps of the gripping “torture” scene from Casino Royale which was more about Craig’s glistening musculature than the brutal action being taken on his nads. 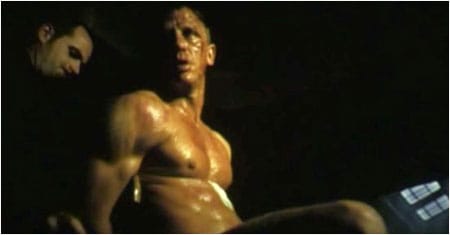