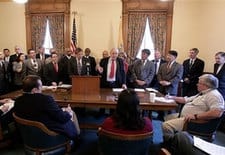 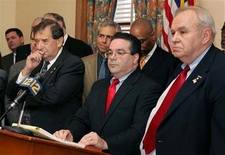 In response to the New Jersey Supreme Court’s instruction to legislators that they define what same-sex unions might be called in that state, New Jersey Senator Gerald Cardinale (on left in right photo) drafted up what might be called the non-creative bigot option: a bill that would amend the constitution to declare marriage between a man and a woman.

However, since it’s the season of giving, Grinch Cardinale did offer this as well: “At the same time, Mr. Cardinale said he would support legislation currently being drafted that would allow other nontraditional families — such as a grandchild taking care of a grandparent — to receive the same legal rights as gay couples as long as the relationships were not called civil unions.”

Said Cardinale: “We are dealing here with an issue of humanity and of civilization.”

Steven Goldstein of Garden State Equality responded: “He’s out of touch, and he’s out of his mind. This is laughable upon arrival.”

Cardinale made sure a roomful of clergy thugs were there to back up his announcement at a news conference at the State House, even though Democrats, who control both houses, say they won’t put the measure up for a vote.