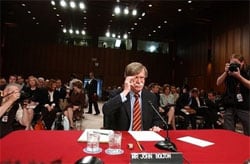 George Bush’s appointment for ambassador to the United Nations, John Bolton, will resign within weeks according to the White House. Bolton was never able to win Senate confirmation after his nomination was blocked by Democrats and a few Republicans. The unpopular Bolton was nominated by Bush while the Senate was in recess, and he was booed shortly thereafter on the sidewalk outside the U.S. Mission.

Check out this clip of Bolton’s meltdown. What a diplomat.