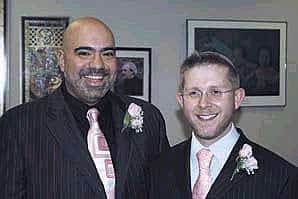 Two months after Jerusalem’s High Court of Justice ruled that same-sex couples married in countries where it is legal can be registered as married couples in Israel, Avi and Binyamin Rose have become the first to do just that, according to the Jerusalem Post.

The Roses were married on June 28th in Toronto.

Said Avi, who works as an educator for the Young Judaea youth movement: “We did the civil ceremony in the hopes that we would eventually be able to make legal what we felt inside. We wanted the government of Israel to recognize that we are a couple. It was no more of a statement than [coming from] a ‘regular’ couple, but we are both committed Zionists and are hopeful that our union will bring more progress on this issue…The protests last year over the Gay Pride Parade in Jerusalem really spooked us, and many of our friends here chose to leave the city. But we are very committed to building our lives in Jerusalem and the Interior Ministry provided us with a very positive experience today.”

Binyamin, a social worker and therapist, described the registration process as fairly routine: “[The clerks] were a little confused by our application but they made the necessary changes to the forms and they came through beautifully for us.”