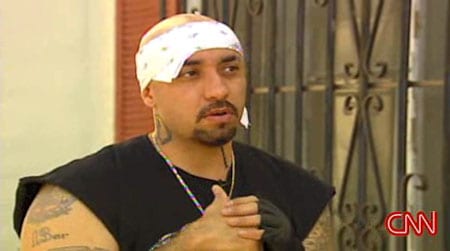 Deadlee: “I think an artist actually has a responsibility too. There’s a deal, like I said, that whole song with Eminem (with the lyrics that go) ‘I hate fags? The answer’s yes’? If he would have said that same thing, like, ‘Do I hate blacks? The answer’s yes’, ‘Do I hate Hispanics , the answer’s yes’, I think Eminem would be dead today. I think he’s trying to pick on the people who he thinks are weak, and can’t defend themselves. And I’m kind of stepping up to the game with all kinds of homorappers and saying, we’re not weak, we can go head to head with you in the rap game, and even in a political stance, and say we’re here. You can’t be picking on us. It’s so easy for peope to say ‘I hate gays’. It’s the one group of people that it’s still okay to hate on.”

Good for Deadlee. He’s organized and is headlining the Homorevolution Tour 2007, beginning in March.