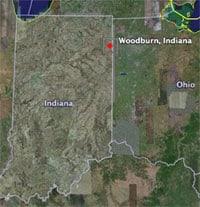 Sophomore Megan Chase wrote an opinion piece for her school newspaper at Woodlan Junior-Senior High School in Woodburn, Indiana, calling for tolerance of gays and lesbians. It read, in part:

“I can only imagine how hard it would be to come out as homosexual in today’s society. I think it is so wrong to look down on those people, or to make fun of them, just because they have a different sexuality than you. There is nothing wrong with them or their brain; they’re just different than you.”