Staff Sgt. Eric Alva, who was the first Marine seriously wounded in the war with Iraq, will come out of the closet today, standing by Rep. Marty Meehan, D-Mass and a bipartisan congressional group at 2pm as they introduce legislation calling for the repeal of the military’s “Don’t Ask, Don’t Tell” policy. 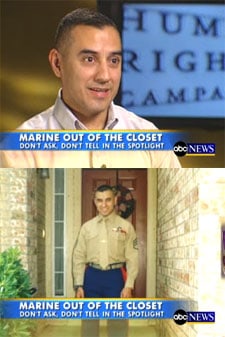 Alva lost his leg serving for the United States, ABC News has his story:

“Alva…was a decorated staff sergeant who had served in Somalia and Japan. As troops began to push into Iraq, on March 21, 2003, Alva was leading 11 Marines among 75 or so sailors and Marines in a 50- to 55-vehicle convoy on its way from the desert in Kuwait to Basra, Iraq. It was a logistical convoy moving through the desert at night, lights out, night-vision goggles on. The sand was so kicked up it was nearly impossible for Alva to even keep track of the vehicle in front of him. At one of three stops along the way, Alva, who hadn’t eaten for a full day, was heating up an MRE when he went to get something out of his Humvee. ‘I took maybe a step or two,’ Alva said, ‘and that is when the explosion went off.’ It was a land mine.”

None of them knew he was gay.

Although he kept it a secret from his commanding officers over the years, Alva says plenty of soldiers knew he was gay and it was never a problem:

“I told tons of people. A lot of my friends, my buddies, my closest Marines, people I had served in combat with. Straight guys, married, with children and everything, three of them which I have become their sons’ godfather now. Everybody was just respectful and was just like ordinary. ‘That’s it? That’s your big news?’ Being on the front lines and serving with the people who even actually knew that I was gay, you know, that was never a factor. We were there to do a job. We were [there] to do a mission. I don’t think people would have a hard time with it because they know that the person right next to them is going to be there to protect them, in our terms, ‘have their back.'”

It’s long past time for this policy to go. Thank you, Eric Alva, for coming out.

You may have missed…
Rep. Marty Meehan (D-MA) to Reintroduce Legislation Calling for the Repeal of “Don’t Ask, Don’t Tell” [tr]