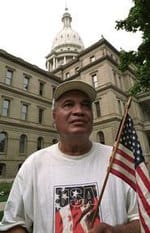 Funeral arrangements have been set for Andrew Anthos, the 72-year-old gay senior citizen who was beaten to death in a homophobic hate crime last week in Detroit.

The other tragedy? A senior citizen who campaigned for 20 years is beaten to death with a pipe in an anti-gay attack and not one item from CNN, or the other major outlets. Pathetic.

ADDENDUM: A tipster writes in, “The family has requested that donations be made in the family’s name to go toward Mr. Anthos’ dome fund and to assist them in their campaign to fight hate crimes. Funds in the Anthos family name can be mailed directly to the funeral home, however, I have no idea what or how funds will be used specifically or what anti-hate crime campaign the family plans to commence.”