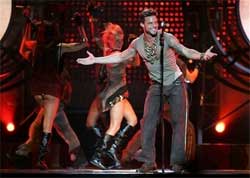 Wednesday I posted about the message Ricky Martin has been sending to concertgoers:

“During his performance in Puerto Rico, Ricky Martin stuck his middle finger out when he mentioned President Bush’s name. In the song “Asignatura Pendiente”, there is a line in the lyrics that goes: A photo with Bush… As he said this, Ricky gave him the F-you treatment and the crowd of 18,000 fans went crazy and cheered.”

“My convictions of peace and life go beyond any government and political agenda and as long as I have a voice onstage and offstage, I will always condemn war and those who promulgate it.”