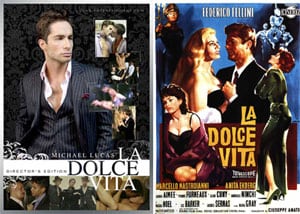 According to the AP: “International Media Films said it bought ‘La Dolce Vita’ for its library of classic titles in 2001, treasuring a movie that introduced the term ‘paparazzi.’ The film follows the life of a tabloid journalist who covers the glitzy show business life of Rome while yearning to write about more serious subjects. It said Bregman’s use of the title of its movie was likely to cause confusion among consumers.”

Bregman, who recently had his name legally changed to his ‘stage name’ Michael Lucas, responded:

“This lawsuit is completely out of line. I think they’re making fools of themselves. I don’t think Fellini would like that. Nobody can be confused and think they’re buying Fellini’s movie by buying mine. It’s a sex flick. This movie’s taking place in New York today and has absolutely nothing to do with Fellini’s, produced in 1960 in Rome. I’m not hiring [my actors] for their ability to act. That’s for sure.”