Tony Blair talked with openly gay actor and comedian Stephen Fry in a podcast posted on the #10 Downing Street website. In the interview, the two reflect on the state of modern Britain and Fry thanks Blair for his work on gay rights. Blair also gives an idea on how he feels he’s positioned in terms of his values: 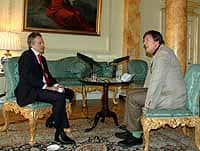 “I think if you were looking for a sort of more mature consensus about issues to do with liberty and freedom today, I mean I think there is a particular type of political philosophy, and this is where I am as it were, which is I would be very liberal on say gay rights, you know the equality agenda, ending discrimination against people for whatever reason, but probably less liberal than a previous Labour generation would have been on law and order issues, or antisocial behaviour, you know people who commit violent crime and so on. What is quite interesting is that in the ’60s you would have had a consensus which was a sort of gathering liberal consensus in both spheres, both in terms of personal lifestyle, you know the sexual revolution and all the rest of it, and in relation to you know traditional civil liberties arguments in the criminal justice system. I think what is interesting today is that it is what I sometimes call for shorthand a sort of pro-gay rights, tough on law and order position, which I think is something different from what you would have had a generation ago.”

You can view the transcript and download the podcast here…