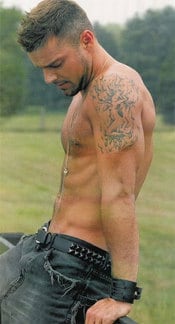 While touring Mexico City on his “Black & White” Tour, Ricky Martin was asked about the recent coming out of Mexican pop star Christian Chavez (whom the Associate Press calls Christian Sanchez). Chavez told fans he is gay in early March after pictures of the singer marrying his partner in Canada in 2005 surfaced on the internet.

In a letter on his website, Chavez wrote: “I don’t want to keep on lying and lie to myself because of fear, I love what I do and singing is my life, my passion. I would never dream of doing anything else. I feel bad for not having shared this withall my fans before, as they are the ones that worry and it is because of them that I decided to be honest.”

Martin said of Chavez: “Life is too short to live closed up, guarding what you say. [Christian] has to be free in many aspects. I wish him much strength.”