Neil Patrick Harris appears on Ellen today and tells her that he came out to avoid being outed by the media: 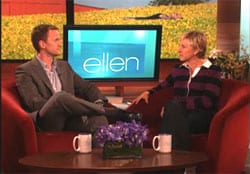 “There was…media scrutiny heading my way. People were starting to ask for stories of other people that may have fooled around with me, and the last thing you want to do is talk about your private life based on scandal. I’m not a very scandalous person and so I didn’t want to have to respond to some story, whether it was lie or truth – so I just made a statement and sort squashed the fires…My life had been relatively open in my world. I’ve been dating the same guy for three years and our families know. We go out together all the time but I just feel like as an actor part of your occupation is retaining a bit of mystery so you can be believable in many different types of roles, so I never felt it was an obligation for me to hold pinkies down the red carpet or anything.”

And as for the response?

“For me that is the greatest ending to the story so far – that nothing really has changed at all. I’m doing nothing different and people aren’t behaving differently towards me. … People heard and they’re like ‘Yeah, and?’ That attitude, I think, was great.”

Harris came out following a gossip item on Canada.com that mentioned he had arranged for a part on How I Met Your Mother for his “longtime sweetheart” David Burtka.

Soon after, Harris’ publicist reportedly issued a denial, saying Harris wasn’t “of that persuasion”. Several days later, Harris was out.