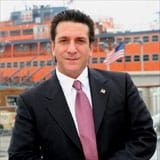 Staten Island’s newly-elected assemblyman Matthew Titone told the New York Post that he doesn’t plan on being a “one-issue lawmaker”. In other words, he doesn’t want the fact that he’s openly gay to make people think that’s why he’s in office. In fact, he says, those who elected him can see beyond that: “People realize I’m not that two-dimensional. I have passionate concerns that are relevant to all people…People on Staten Island vote conservative, but that doesn’t mean they are prejudiced or biased. It’s not an issue.”

Except for, perhaps, some in the construction industry. Titone’s partner of 10 years is a construction worker who has come out to friends and family, but not on the job, for fear of not getting any assignments. Said Titone: “It’s a hard balancing act. In that field there is prejudice, bias – ignorance, really.”