You’ve no doubt read something about the promise of stem cell research in curing diseases, a promise that George Bush is willing to sacrifice to satisfy his theocratic base. 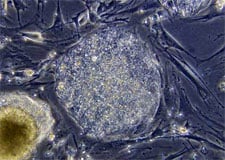 The latest evidence of the hope that stem cells offer comes in a study published in the Journal of the American Medical Association. Stem cells may offer a “cure” for insulin-dependent diabetics:

“In a breakthrough trial, 15 young patients with newly diagnosed type 1 diabetes were given drugs to suppress their immune systems followed by transfusions of stem cells drawn from their own blood.” The results? “All but two of the volunteers in the trial…do not need daily insulin injections up to three years after stopping their treatment regimes.”

A vote tonight in the Senate could overturn the strict limits Bush placed on stem cell funding, but Bush has once again promised to go against the will of the American people and scientific evidence and veto the legislation. Stem cell advocates believe they are close to having the votes to overturn the veto, and John Sununu could be the deciding vote.

You may have missed…
Bush’s Shameful Stem Cell Veto [tr]

Previous Post: « Towleroad Guide to the Tube: #115
Next Post: Colorado Teen Assaulted by Fellow Students for Being Gay »