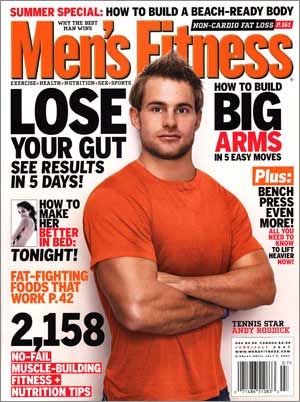 Andy Roddick has posted a response on his blog to the recent Men’s Fitness cover story on him which featured a bigger, stronger, buffer version of the world’s #3 player, and apparently the Photoshop job was as obvious to Roddick as it was to everyone else.

“I spent the last few weeks in Austin really focused on my training and getting back into shape…but pretty sure I’m not as fit as the Men’s Fitness cover suggests…little did I know I have 22 inch guns and a disappearing birth mark on my right arm. I saw the cover for the first time when I landed after Rome…it was pretty funny…I walked by the newsstand in the airport and did a total double take …I can barely figure out how to work the red-eye tool on my digital camera…whoever did this has mad skills…maybe Rafael Nadal wants his arms back?…if you can manage to stop laughing at the cover long enough, check out the article inside, the photo shoot on the boat was pretty cool..and I recognize the person in those photos…”

You may have missed…
Did Andy Roddick get a Photoshop workout? [tr]