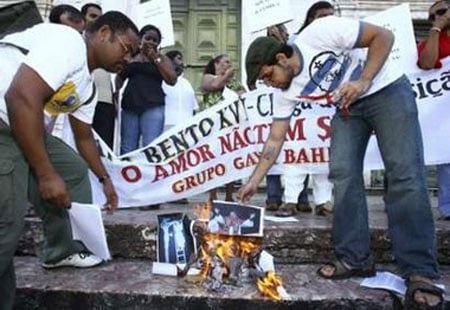 Gays in the state of Bahia, Brazil marked Pope Benedict XVI’s arrival in the country with a protest at the Cathedral of Salvador in the city’s Pelourinho section on Wednesday. 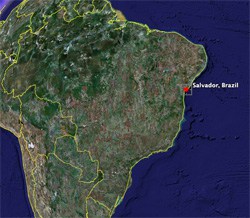 According to German Press Agency DPA, “The group said the cathedral property was used to torture and murder homosexuals during the colonial period, when the Catholic church judged them as ‘heretics’ for violating its dogma. The organization’s president, Marcelo Cerqueira, said the protests would also be aimed at other rules, reaffirmed by Benedict XVI, such as the condemnation of divorce and the use of birth-control pills and condoms. ‘It is a criticism against the (Church’s) positions and in favour of freedom,’ he said. Cerqueira stressed that his group was not against Catholics, but against the conservative positions represented by the pope, ‘who sows discord and is culpable for many victims infected with the HIV virus,
and for many unwanted pregnancies.’ He said the Vatican’s policies ‘heighten hatred and homophobia,’ and noted that a homosexual is killed every two days in Brazil, often by stabbings and gunshots.” 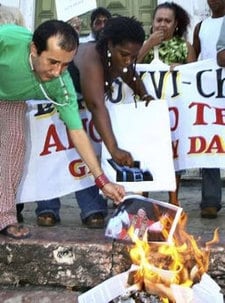 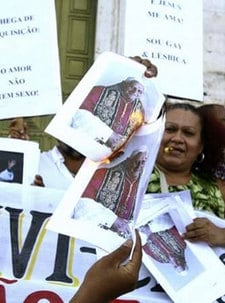 And in Sao Paolo, where the Pope arrived, activists assembled in Republica Square with colorful banners declaring “homophobia is a sin” and “Jesus Loves Gays”. 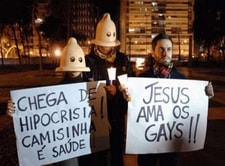 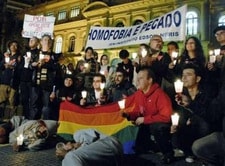 The Pope is in Brazil until May 13th.