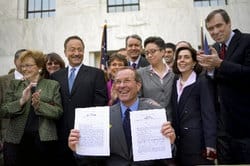 Two bills, one that bans employer discrimination against gays and lesbians and another that offers same-sex partners some of the rights of married couples in the form of domestic partnerships, were signed into law by Oregon Governor Ted Kulongoski today.

Gay activists and supportive lawmakers have fought for 30 years to pass the laws, which go into effect on January 1st: “More than 100 people watched and applauded as the governor signed the bills on the west steps of the Capitol, including former governor Barbara Roberts, many legislators and dozens of gay rights activists.”

Still not marriage, but a step in the right direction.