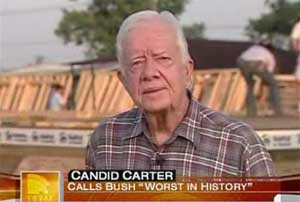 “I think as far as the adverse impact on the nation around the world, this administration has been the worst in history. The overt reversal of America’s basic values as expressed by previous administrations, including those of George H.W. Bush and Ronald Reagan and Richard Nixon and others, has been the most disturbing to me…We now have endorsed the concept of pre-emptive war where we go to war with another nation militarily, even though our own security is not directly threatened, if we want to change the regime there or if we fear that some time in the future our security might be endangered. But that’s been a radical departure from all previous administration policies….The policy from the White House has been to allocate funds to religious institutions, even those that channel those funds exclusively to their own particular group of believers in a particular religion. As a traditional Baptist, I’ve always believed in separation of church and state and honored that premise when I was president, and so have all other presidents, I might say, except this one.”

The White House responded on Sunday, as spokesman Tony Fratto replied, “I think it’s sad that President Carter’s reckless personal criticism is out there. I think it’s unfortunate. And I think he is proving to be increasingly irrelevant with these kinds of comments.”

This morning, on the Today show, Carter backtracked on the comments, saying he was answering a question comparing the Bush administration’s foreign policy to Richard Nixon’s:

“They were maybe careless or misinterpreted. [I] certainly was not talking personally about any president. I think they were [careless], yes, because they were interpreted as comparing this whole administration to all other administrations.” (video)

Careless or not, I’m sure Carter could find plenty of people to agree with him.